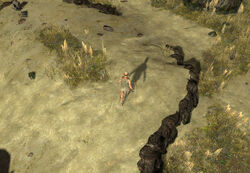 The Climb is an area in Act 1. This area has a waypoint and is connected to The Ledge and The Lower Prison.

Starting from the Ledge at the bottom, players fight their way up cliffs to reach Axiom Prison. The waypoint can be found by following along the left or right edge about halfway through the area.

There is a large flag called Lioneye's Standard in this area, reading: There is no Honour without Sacrifice. This marks the site of a major battle between King Kaom and Marceus Lioneye during the Purity Rebellion.