Life pales in the wake of progress. 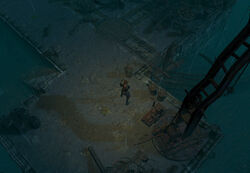 The Docks is an area in Act 3. It has a waypoint and is connected to The Battlefront.

From the Battlefront exit, the docks have a large central area with several paths branching outward. Stairs connect the higher paths with the lower platforms where boats were tied. Fairgraves and the waypoint are at the end of one path, and the quest item

is in a chest at the end of another branch.