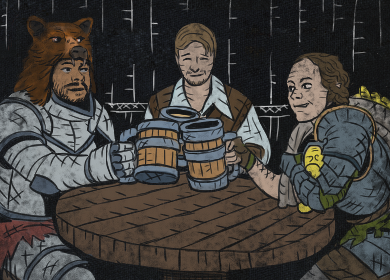 The Enthusiasts is a divination card. A set of three can be exchanged for a corrupted

Victario's InfluenceVictario's Influence
Lacquered GarbQuality: +20%
Evasion: (686-772)
Energy Shield: (134-151)
Movement Speed: -3%Requires Level 52, 76 Dex, 76 Int+1 to Level of Socketed Aura Gems
Socketed Gems are Supported by Level 30 Generosity
Socketed Gems have 30% reduced Mana Reservation
(120-150)% increased Evasion and Energy Shield
(20-40)% increased Area of Effect of Aura Skills
(10-15)% increased effect of Non-Curse Auras from your Skills"Every life is a story.
If you're not writing your own,
you'd better know who's writing it for you!"
- Victario, the People's Poet

The Enthusiasts was created by supporter Arenyr.