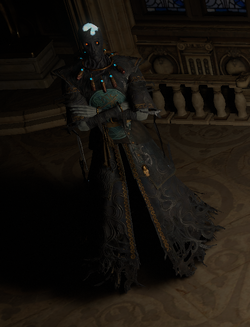 The Envoy is an NPC randomly encountered in maps. He is a messenger from a place of great darkness and great distance and warns that his ward, The Maven, has come.

Good tidings, Nomad. I am a simple messenger from a place of great darkness and great distance, in a form most pleasing for those who must listen.

Those great and unreachable have heard the Silence echoing from that which once hunted here, and they have turned their gaze to this place. Rejoice, Nomad, for she approaches, and she seeks to witness your struggle.

She is waiting for you, Nomad, and she is not known to be patient.

You have called the Maven to this place, for I too heard it. She is near, and eager to witness your struggle.

The Maven has come once more, drawn by your beacon. Perform adequately for her, and you will be granted an invitation to a true test of your mettle.

You should not refuse it.

Beware what you ask, nomad. Curiosity is a charming trait until it is not. Information will be volunteered, not coerced. It will create more questions than it answers. When at last their shadow is cast upon the firmament, it will take more than you can possess to bind and silence the screams within your mind.

It lurched across these places with a hunger insatiable. It craved events past and prevented events passing. A mind like yours, so full of ideas and memories that flutter and swirl around you like smoke, would have been an irresistible temptation.

It went by a great many names. The Unraveller. The Child of Decay. The echoing whispers of history here give a different name. The Elder.

It served greater forces, as I do. Those forces are still at work, but the servant is gone, the home left vacant. For now.

For an eternity, the darkness swelled within a ceaseless churn of its feeding, and then... silence. Such silence is deafening to those who listen for it. The abyss cast its gaze upon its source. The first lurching movement of boundaries drawn long before the dawn. A claimant has arrived. You may know who. You wish to know why.

The Maven seeks new conflict. Bored, she is, with the realm she has given. She is not the only one. The silence is deafening to all.

You fear The Maven. You fear she is The Elder, returned and emboldened. She is, and she is not.

The Maven serves not the Decay. She serves only her own amusement, passing eternity with an endless string of meaningless struggles.

She is not the Elder, but you are right to fear her.

We are of one flesh, but two minds, two bodies. We are kin, both born of the tangled anarchy of the void, but we share not the same creator. She is my ward, and she is my prison. I am her protector, and I am her servant.

The Maven must be protected and guarded. A mercy for you both. The end is delayed but not prevented. Savour your remaining time, I urge you. Prepare for its arrival, I urge you.

Unlike any other NPC in the game, the Envoy's volume will remain consistent regardless of your distance.