The Root of the Problem 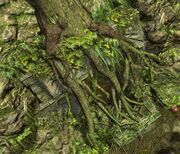 The tree roots blocking entrance to the Vaal Ruins

The Ancient Seal within the Vaal Ruins

This quest given to you by Helena in Forest Encampment requires you to travel to poison the tree, Lorrata, in the The Wetlands with

Helena: Piety would’ve concurred with Eramir’s theory about that north-western ruin. The Vaal were a powerful civilization predating even the Eternal Empire and Piety very much wanted to see what toys the Vaal might have left for her to play with behind those stone doors. Yet we couldn’t budge them, not with that giant of a tree holding them fast in her roots.

You now carry a cure to that problem, or rather, a useful illness. Use the Spike to inject the Baleful Gem’s calibirc extantia into the roots. One day soon, Piety will find her way into that ruin. You need to get there first.

is dropped by The Weaver in The Weaver's Chambers.

is acquired in the Chamber of Sins Level 2.

This quest is completed once you make it to The Vaal Ruins.