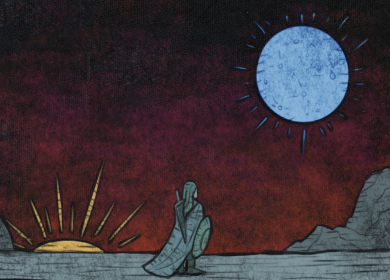 The Twilight Moon is a divination card. A set of six can be exchanged for

The Twilight TempleThe Twilight Temple
Moon Temple MapMap Level: 69
Map Tier: 2
Guild Character: ^
Item Quantity: (+75%-+100%)
Item Rarity: (+125%-+175%)
Monster Pack Size: (+25%-+50%)Area has increased monster variety
Players are Cursed with Flammability, with 60% increased Effect
Players are Cursed with Frostbite, with 60% increased Effect
Area is inhabited by Lunaris fanatics
Area is inhabited by Solaris fanaticsIn the shadow of war,
all are eclipsed.Travel to this Map by using it in a personal Map Device. Maps can only be used once.

The Twilight Moon was created by supporter Collento.