The air is rich with despair and apparition. 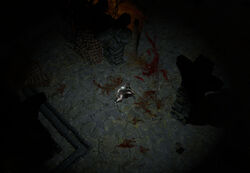 The Upper Prison is an area in Act 1. This area has no waypoint and is connected to The Lower Prison and Prisoner's Gate.

Defeating Brutus will unlock the door to the Prisoner's Gate. The waypoint in that area will also be activated, so you can optionally portal back to town before proceeding. After leaving The Upper Prison for Prisoner's Gate you won't be able to come back that way.

Native monsters in this area can resist cold, lightning or elemental damage and deal physical, cold or lightning damage. They can deal physical damage over time and apply the