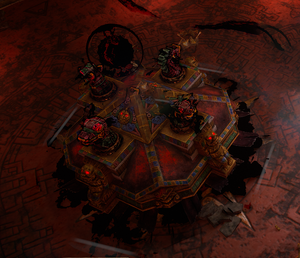 The Vaal Omnitect is the final boss of The Temple of Atzoatl, introduced in the Incursion leagues.

You are taking more damage from the Omnitect's thruster the longer you stand underneath it.
Debuff

You have less Movement Speed and take increase Lighting Damage

The Vaal Omnitect has several different skills. Each of its four heads attack autonomously.

At ~75% and 25% health, it will charge up and use one of two attacks while also gaining damage reduction for the attack.

At 50%, the Omintect goes invincible, drops down at the center of the stage and spawns Energised Phantasms at the corners of the arena that move towards the Omnitect, restoring its Energy Shield if they touch it. These can be killed and provides flask charges.

The Vaal Omnitect can be augmented by upgrading specific incursion rooms :

The Omnitect drops rare items with an Incursion mod, as well as a unique item or vial.