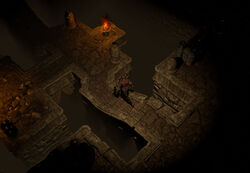 The Vaal Ruins is an area in Act 2. This area does not have a waypoint and is connected to The Wetlands and The Northern Forest.

To enter the Vaal Ruins, players must finish the quest The Root of the Problem. This requires the

from The Chamber of Sins Level 2 and

from The Weaver's Chambers.

The ruins are a large maze with rooms of various sizes. Sarcophagi appear in some rooms and act like normal chests.

Towards the end of the area the path is blocked by the Ancient Seal, which once activated unleashes a strange darkness and initiates the

Shadow of the Vaal quest. Stairs leading up to the Northern Forest are on the other side.

That ancient gateway to the northwest, it's a peculiar thing. Not of the Eternal Empire. It could be Vaal in origin... a culture I've seen mentioned here and there in some of the most antique of texts. It is the Vaal who began the use of Virtue Gems, well before our imperial ancestors. Little else is known about them. If only I had my old museum archives, I could have given you a more tempered theory.