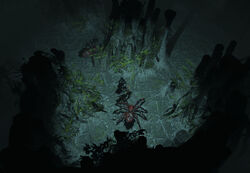 The Weaver's Chambers is an area in Act 2. This area does not have a waypoint and is connected to The Western Forest.

This large spider burrow is covered entirely in webbing and branches into a maze of small rooms. At the end is a door to an open sub-area where the Weaver spawns. When you move far enough into the room, the boss drops from the ceiling with several spiders. Once defeated, the Weaver drops the quest item