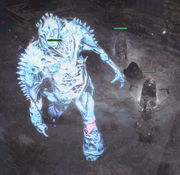 A Witch and her raised They of Tul spectre, in Tul's Domain unique map. The Snow Cloak-vortex and They of Tul's totem can also been seen.

They of Tul is a type of Tul's monster that can be found in a Tul's Breach or in Tul's Domain unique map. It usually appeared as a rare monster, thus it may appear as different random name. The 3D model is similar to Pocked Goliath.

Internally it also has a few variant that have different metadata id.[1][2][3][4] Some variant has the tag "unusable_corpse" and the mod CannotBeUsedAsMinionCannotBeUsedAsMinion
Unique. The Tul's Domain version of this monster can be spectred.

They of Tul will occasionally cast a totem, as well as cast a vortex-like skill that applies a buff Snow Cloak to allies that within the vortex.

, They of Tul did not have the skill "Throws projectiles that spawns an Ice Golem each".[5]