View source
Tornado ShotAttack, Projectile, Bow
Level: (1-20)
Cost: (8-10) ManaRequires Level 28Fires a piercing shot that travels until it reaches the targeted location. It will then fire projectiles out in all directions from that point, which will travel for a short time before disappearing.Per 1% Quality:1Superior2Anomalous3Divergent1% increased Projectile DamageConverts 3% of Physical Damage to a random Element0.5% increased Attack SpeedDeals (100-120)% of Base Attack Damage
Fires 3 secondary ProjectilesPlace into an item socket of the right colour to gain this skill. Right click to remove from a socket. 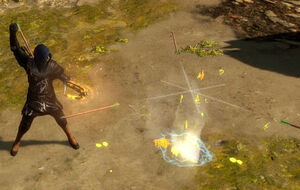 Tornado Shot is a bow attack skill which fires a piercing shot that releases projectiles in all directions when it reaches the targeted location. The secondary projectiles fade over time.