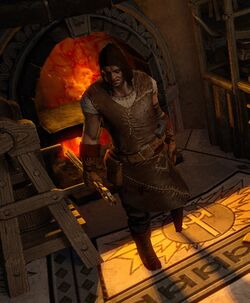 Utula is an NPC located in the Overseer's Tower in Act 5. Utula is the leader in Overseer's Tower, who trades weapons and armor. After completing the "Death to Purity" quest, he disappears from the town.

Templar murders Templar. Not a pretty sight, but it was enough to get this sorry lot up and fighting.

The Tormented One promised us a sign. You're not quite what I expected, but then who am I to argue with Kitava, the immortal slave. He speaks through you, Templar. He tells us that we shall be free.

Utula Makora is what they call me and I've the miserable task of being chief to this lot. Well, I put the steel in their hands. I tell them where to stab, where to run, where to die. If that doesn't make me a chief, what does, eh?

Hah! After everything I’ve done, it took an Oriathan to get these slaves up off their shackled arses and fighting. I guess the Templar should have treated their ‘lessers’ better than their slaves, eh?

Well, I’m not about to turn down a gift from Kitava. If he wants slave and outcast to join hands then let’s remind these Templar that they’re flesh and blood, just like us.

Utula Makora is what they call me. I’m what passes for a chief around here. Well, I put the steel in their hands. I tell them where to stab, where to run, where to die. If that doesn’t make me a chief, what does, eh?

Hah! So you made Justicar Casticus ‘see the light’, did you? Couldn’t have happened to a nicer fulla. Yet now I’ve an even more charming chap for you to make the acquaintance of. He’s over at the Chamber of Innocence, beyond the Templar Courts, and I bet he’s just dying to meet you.

It’s High Templar Avarius I’m talking about, although he’s so filled to the eyeballs with Innocence that it’s hard to tell where the man ends and the god begins these days. That’s good news for us. Kill the man and you kill the god.

And what are the Templar without their god? Lambs in a slaughterhouse.

Take a deep breath. Inhale the twin stink of exploitation and oppression. Yes, these pens and cells have been our home away from home since the first Karui were brought here by Marceus Lioneye. Their great 'Hero of the Empire', one of the best slavers they ever had.

Not that he was the only one. Captain Sigmund Fairgraves funded many an expedition off the whipped backs of Karui children. High Templar Dominus was only the latest in a long line of them to grow rich by trading in misery.

Lani's a pretty tough girl, for a half-blood. Her mother was Karui, but her father... a lord with a nose for island flowers.

Despite that Oriathan stain in her blood, Lani risked her life, time and time again, slipping us the information that she bore between the lords and ladies of Theopolis. Honestly couldn't have put the pieces of this uprising together without her.

And she's a fighter. Struck down two overseers before a third managed to put a scratch on her. Don't worry, it won't slow her down for long. Not Lani.

If it weren't for Lani, I'd have cut that bitch's throat the moment I met her. But Vilenta seems to know her medicine, so she gets to live... until Lani is better.

Then Vilenta will answer for her crimes against us.

Overseer's Tower, this place is called. And you know the worst thing about the men who stood here, watching us, cursing us, descending to whip and kick us like curs? They were slaves, like us, willing to turn on their brethren for a bigger cage and a few extra rations.

I can't quite put into words what a pleasure it was to take this tower, to rip the greedy eyes from those traitors. Did they see it coming? I hope so.

Well... I know his other names. The Black Spirit. The Cannibal King. The Ravenous One. He was all of those things, before Tukohama slashed out his eyes, before Valako drowned him in the seas, before Hinekora whipped him and condemned him to immortal darkness.

Kitava has learned from the suffering inflicted upon him. Learned what cruelty is from his own flesh and blood. Learned what it means to be a slave.

Now he hungers for freedom. Not merely for himself. For all of us who have suffered under whip and shackle.

Kitava is the Tormented One, destined to rise up from the darkness and banish cruelty from this world. And we, his children, rise with him.

Old red eyes. He's been quiet for a long time. Just like Kitava... and Tukohama. All of the old gods. Now Innocence has woken up, and with him, power like I've never seen the Templar wield before.

It's alright though. We slaves, we've got our own god looking out for us now. I can see him in the eyes of my brothers and sisters, smell him in the blood we've spilled, hear his call in the screams of the fallen.

I don't rightly know where the gods have been or what's brought them crawling back. Nor do I really care. All I need to know, my friend, is that we're not alone anymore.

There's two parts to the Templar. The grim face and the spotty arse.

Out front you've got the Templar Courts, usually the last place our hatungo see if they're stupid enough to preach their craft within a Templar's hearing. Oriath's wood-mongers must do a roaring trade with that place. When the wind blows right, you can smell the aroma of barbequed blasphemer from here.

The arse end, that's the Chamber of Innocence. It's where the real earnest believing gets done. Where the young Templar go to pay their respect to God almighty and get the good sense baptised out of their heads. I've not seen the inside the chamber myself, but you can feel it from over a block away. Like there's an eye in your gut, peering through your insides, looking for even the tiniest stain of Sin.

I tell you, sane people go in one end of that place, ash and apostles come out the other. Watch yourself in there.

With Dominus away in Wraeclast, someone had to keep the wheels of oppression turning. Avarius was only too happy to take the job. He'd had plenty of practice already, of course.

It was Avarius who led some of the largest and most crippling raids upon the Ngamakanui and the Ngakuramakoi. It was on his orders that men, women and children were shackled and shipped like cattle to Theopolis.

And it was Avarius who spent five thousand Karui lives building his Templar Courts and his Chamber of Innocence. Who had wives and daughters scrub their husbands' and fathers' blood from the stones so as to preserve their 'purity'.

When you meet Avarius, feel free to exact a little extra vengeance in the name of Karui suffering.