Vaal Double StrikeVaal, Attack, Melee, Strike, Duration, Physical
Level: (1-20)
Souls Per Use: 30
Can Store 2 Use(s)
Attack Damage: (28-33)% of base
Effectiveness of Added Damage: (28-33)%Performs two fast strikes with a melee weapon, each of which summons a double of you for a duration to continuously attack monsters in this fashion.Per 1% Quality:1Superior0.5% increased Attack SpeedDeals (28-33)% of Base Attack Damage
Base duration is 6 seconds
Adds (3-113) to (5-169) Physical Damage against Bleeding Enemies
25% chance to cause Bleeding
Can't be Evaded
Modifiers to Skill Effect Duration also apply to this Skill's Soul Gain Prevention
Doubles have (0-57)% increased Movement Speed
+(0-2) to Melee Strike Range
CorruptedPlace into an item socket of the right colour to gain this skill. Right click to remove from a socket. 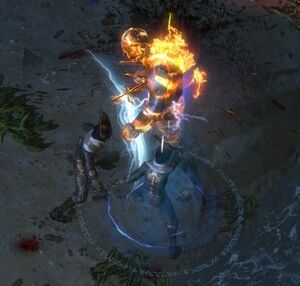 Vaal Double Strike is a Vaal melee skill that performs two fast attacks and summons two doubles of the character to attack monsters for a duration.

Using this skill spawns two clones of your character that use Double Strike to attack. The clones gain all the effects on the character, such as auras and flasks, and are immune to all forms of damage.

Unlike similar skills that creates clones of your character, like

, the clones are not classified as minions, so they will not benefit from any effects regarding minions.

The clones create a visual snapshot of the character upon usage of the skill, which includes visual effects like the charges or monster auras stolen by

Inspired LearningInspired Learning
Crimson JewelRadius: SmallWith 4 Notables Allocated in Radius, When you Kill a Rare monster, you gain 1 of its Modifiers for 20 secondsIf you do not learn from a won battle
then you have already lost the war.Place into an allocated Jewel Socket on the Passive Skill Tree. Right click to remove from the Socket.

. These effects will not have any effect on the clones however.

The clones will teleport to your location if you move too far away from them.