Vaal Ground SlamVaal, Attack, AoE, Slam, Melee
Level: (1-20)
Souls Per Use: 15
Can Store 4 Use(s)
Attack Speed: 90% of base
Attack Damage: (190-300)% of base
Effectiveness of Added Damage: (190-300)%Slams the ground in front of you, creating a wave that travels in all directions that damages and stuns enemies. The wave deals more damage to closer enemies. Requires an Axe, Mace, Sceptre, Staff or Unarmed.Per 1% Quality:1Superior1% increased Stun Duration on enemies
0.5% increased Area of EffectDeals (250-400)% of Base Attack Damage
200% increased Stun Duration on enemies
Deals up to (40-49)% more Damage to closer targets
Stuns Enemies
Can't be Evaded
+(0-9) to radius
CorruptedPlace into an item socket of the right colour to gain this skill. Right click to remove from a socket. 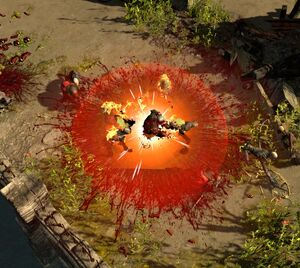 Vaal Ground Slam is a vaal melee attack that slams the ground, creating a wave that travels in all directions, knocking enemies back and stunning them.

Vaal Burning ArrowVaal Burning ArrowVaal, Attack, Projectile, AoE, Fire, Bow, Duration
Level: (1-20)
Souls Per Use: 20
Can Store 3 Use(s)
Attack Damage: (160-198)% of base
Effectiveness of Added Damage: (160-198)%
Projectile Speed: 3260Fires an arrow that explodes, dealing fire damage to its target and other nearby enemies, with an increased chance of igniting them.Per 1% Quality:1Superior+0.5% to Fire Damage over Time MultiplierDeals (160-198)% of Base Attack Damage
50% chance to Ignite enemies
(150-188)% more Damage with Ignite
100% of Physical Damage Converted to Fire Damage
Projectiles Pierce 3 additional Targets
Can't be Evaded
CorruptedPlace into an item socket of the right colour to gain this skill. Right click to remove from a socket.

Exerted - Vaal Ground Slam is currently the only vaal skill that can be exerted by warcries.

gloves have the potential to prevent your hits from killing enemies, keeping them alive on 1 life. This allows the character to wait until the soul gain prevention time is over to kill enemies and gain all souls from all kills. The base duration is 1 second and this can be reduced further by Vaal Skills have % reduced Soul Gain Prevention Duration. After the soul gain prevention timer has expired, the enemy can be killed by any non-vaal skill that can do damage over time and the character will gain all souls for all kills if they have room to store those kills. If the kill size outnumbers the souls per use in every situation, this combination can be repeated over and over again. In other words in areas where you regularly kill 15 enemies or more at the same time, vaal ground slam will always have enough souls to be used on every pack of enemies.