Vaal Molten ShellVaal, Spell, AoE, Duration, Fire, Physical, Guard
Level: (1-20)
Cooldown Time: 0.50 sec
Can Store 1 Use(s)
Souls Per Use: 50
Can Store 1 Use(s)
Soul Gain Prevention: 0 sec
Cast Time: InstantApplies a buff that raises your armour, and takes some of the damage from hits for you before being depleted. Each second, the skill deals reflected damage to surrounding enemies based on the damage taken by the buff in that second. When the buff is removed, the skill deals reflected damage to enemies around you based on the total damage that was taken by the buff. You cannot have the buff at the same time as any other Guard skill.Per 1% Quality:1Superior1% increased Skill Effect DurationBase duration is 9 seconds
Buff grants +(25-429) to Armour
(30-35)% of Damage from Hits is taken from the Buff before your Life or Energy Shield
Buff can take Damage equal to 30% of your Armour, up to a maximum of 30000
Reflects (300-9000)% of Damage taken from Buff as Fire Damage each second,
or when Buff expires or is depleted
Buff grants (20-29)% more Armour
Modifiers to Skill Effect Duration also apply to this Skill's Soul Gain Prevention
CorruptedPlace into an item socket of the right colour to gain this skill. Right click to remove from a socket. 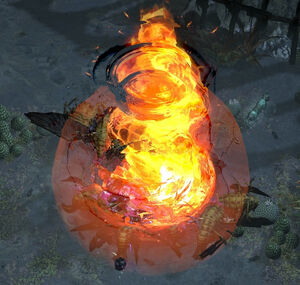 Vaal Molten Shell is a vaal spell that creates a shell around the user that grants extra armour and absorbs incoming hits, absorbing more damage with increased armour. Each second or when expiring, the shell deals fire damage around it based on how much damage it has absorbed.

Below are the 5 skill gems with the Guard gem tag:

Unlike its non-Vaal counterpart, Vaal Molten Shell will persist for the full duration, regardless of how many times an explosion is triggered. This unique property offers potentially vastly more utility than Molten Shell at the cost of less availability. Because of this, it is recommended that Vaal Molten Shell be saved for an occasion in which it will offer the greatest benefit, such as during an encounter with a unique monster or even a troublesome rare.

Due to the nature of Vaal Molten Shell, it has synergy with support gems that utilize the potentially frequent explosions, such as stun or life leech; however, the rather steep soul cost of Vaal Molten Shell gates the strength of the gem. In addition, while the armour offered during Vaal Molten Shell's duration is first-rate, it may cause conflicts with

Cast when Damage Taken SupportCast when Damage Taken SupportSupport, Spell, Trigger
Icon: !
Level: (1-20)
Cost & Reservation Multiplier: 250%
Cooldown Time: 0.25 sec
Can Store 1 Use(s)Requires Level 38Each supported spell skill will track damage you take, and be triggered when the total damage taken reaches a threshold. Cannot support skills used by totems, traps, or mines. Vaal skills, channelling skills, and skills with a reservation cannot be triggered.Per 1% Quality:1Superior2Anomalous3DivergentSupported Skills deal 0.5% increased DamageSupported Skills have 1% increased Skill Effect DurationSupported Skills require 1% reduced amount of Damage taken to TriggerTrigger Supported Spells when you take a total of (528-3272) Damage
Supported Skills deal (-70-6)% more Damage
This Gem can only Support Skill Gems requiring Level (38-70) or lower
You cannot Cast Supported Triggerable Spells directlyThis is a Support Gem. It does not grant a bonus to your character, but to skills in sockets connected to it. Place into an item socket connected to a socket containing the Active Skill Gem you wish to augment. Right click to remove from a socket.

Items which deal damage to you will also trigger the explosion: