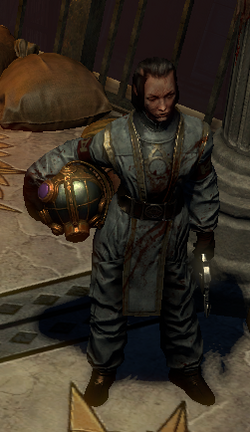 Vilenta is an NPC located in Overseer's Tower in Act 5. She became an area boss in Act 10.

Talking to Lani in Oriath Docks would trigger dialogue regarding Vilenta, hinting at her transformation. This option will disappear once obtaining the quest to kill her in Act 10 as a monster.

Unlike these assorted ignorami, I’m not surprised to see you here. The Beast is dead, all thanks to you, I suppose. I was listening to the Beast’s death rattles when these lunatics broke in, wrecked the place and dragged me here to tend to their cuts and bruises.

Thankfully, I was able to bring some of my paraphernalia with me. The balance of power is shifting in your favour, O murderer of nightmares. If I am in possession of anything that might smooth the transition of governance, don’t hesitate to ask. You’ll find my terms quite reasonable.

In contrast to the company she keeps, Lani has quite an astute mind. I put it down to that Oriathan education she’s managed somehow to procure.

Whilst quelling whatever resistance you might meet in this ‘noble’ coup of yours, you’d be well-advised to look to Lani for counsel. She’d make the finest of adviser, second only to myself, of course.

Utula might appear to conduct himself with honesty and honour yet has all telltale signs of a desperate man born of desperate times. As the cornered animal will bite and claw, the cornered man will lie, steal and murder in the name of survival. It’s understandable, and deadly if underestimated.

Utula (after "Death to Purity" quest)

I told you so. What more need I say?

Bannon claims that a god now lives inside his head and talks to him. What’s more common, divine possession or insanity? I’ll leave you to calculate the odds.

I can’t really fault Justicar Casticus. A man committed, heart and soul, to upholding the law. Of course, law isn’t the same thing as justice, and men like Casticus lack the imagination necessary to make that distinction.

Avarius, Innocence… I’m not sure there’s a great deal of difference. Around the time I heard the Beast’s mortal scream, the newly appointed High Templar Avarius went through something of a… revelation. The manner in which he speaks and acts now would indicate that he believes, without doubt, that he is some earthly embodiment of God. That’s Faith for you. It’ll reduce grown men to the madness of infancy.

The Sign of Purity, yes… a descry staff that Piety sent me to study at one point. Apparently it was a gift from Innocence to the first High Templar, Maxarius. Dominus couldn’t even bear to touch the thing so he had it locked up in the Ossuary. Quite reactive behavior for a man of such formidable intellect, yet now it’s making a little more sense.

The staff was certainly able to conduct and store energy, yet remained inert when I applied corruption to it. It must only respond to divine energy, and with corruption and divinity being diametrically opposed, it’s no wonder that my experiments failed to excite the thing!

Meaning, if the Sign of Purity is a repository for the power of Innocence, Dominus could never have wielded it, being steeped as he was in the opposing power of the Beast.

You though… you’re a different matter entirely.

I gave Piety everything, devoted my life to her work. What did that thankless bitch do for me in return? Left me here to polish her beakers while she pursued glory in Wraeclast.

Oh. You killed her, did you? Likely as not, you’d have killed me too had I been there. In that case, perhaps we both got exactly what we deserved.

Piety and I have devoted ourselves to the betterment of the human condition. As for our methods, Piety had a saying that summed it up nicely. “Would you consider the feelings of the stones when constructing a glorious cathedral in the name of God?”

Casticus supplied us with slaves, mostly Karui, and I put them to good use. In fact, I believe their participation in my experiments elevated them from squalor to splendor. Our subjects were able to give their otherwise meaningless lives to something greater than themselves.

Isn’t that what we all want in the end?

People have talked about the ‘return of the gods’ since the birth of Oriath. It’s a gambit, employed by charlatans to fleece the weak minded and morally desperate.

Or so it seemed.

Avarius and his Templar drones now greet the dawn filled with power and glorious purpose. Kitava has risen from whatever ethereal cesspit he’s been hiding in for the last few millennia.

So what let the cats out of their proverbial bags? I’m a scholar, not a prophet, yet there’s one occurrence that absolutely reeks with evidential causality.

You killed the Beast.

You really don’t have a strong grip on cause and effect, do you. Things replace other things, it’s the most fundamental of laws. The larger the thing you remove, the bigger the rush to fill the space it’s left behind.

Innocence was the nexus of power in Oriath. Remove him and something of equal or greater power was always going to take his spot. Any idiot could have predicted that Kitava was going to be that something… unless, of course, you thought it was going to be you.

Dominus adopted Chitus Cathedral as his personal laboratory. He decked it out with everything his miraculous mind could conceive of. His great work in Sarn, that which you destroyed, it all began there.

Kitava is a primal deity, forged from the most fundamental of human desires. Hunger. The simple act of craving that which we cannot yet consume.

To defeat Kitava is to squeeze the very heart of human nature into stillness. You don’t think you can do that? I’ll suppose we’ll see, won’t we.