View source
Volatile DeadSpell, AoE, Fire
Level: (1-20)
Cost: (9-26) Mana
Cast Time: 0.80 sec
Critical Strike Chance: 5.00%
Effectiveness of Added Damage: 120%Requires Level 12Corpses near the targeted location explode, dealing damage in a small area and creating an orb which moves towards nearby enemies before dealing spell damage in a larger area. The explosion of the corpse is not affected by modifiers to spell damage, and cannot be reflected.Per 1% Quality:1Superior2Anomalous3Divergent0.5% increased Area of Effect1% increased Fire Damage1% increased Orb Movement SpeedDeals (20-507) to (30-760) Fire Damage
Consumes up to 3 corpses
Explosion deals base Fire Damage equal to 3% of the corpse's Maximum Life
Maximum of 60 Orbs at a timePlace into an item socket of the right colour to gain this skill. Right click to remove from a socket. 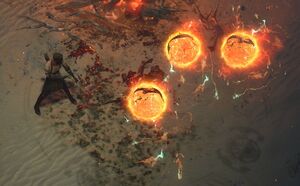 Volatile Dead is a spell that consumes a corpse to summon a volatile orb. The orb homes in on nearby enemies and explodes for fire damage on contact.