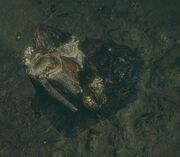 Weathered Carvings are environmental lore objects founds in Act 1 and Act 4. They tell of the Karui's attempt to settle in Wraeclast.

If you listen to all of the stones in the game you get an Achievement called "No Stone Unturned".

Kaom's canoe struck this sand with the force of destiny. At his back, the greatest war host in Karui history tamed the wild sea, their canoes coupling with the land, one by one.

Lioneye's Gemlings met us with shining metal and bold words. Hyrri's arrows withered their pride. Kaom's axes silenced their despair. Marceus Lioneye fought bravely, to the last. Kaom honoured him with a place on his belt.

Kaom has removed the Eternal stain from this coast. The Empire's citizens decorate our meeting houses with their heads. Our warriors build homes for our families. Our families till the earth, fish the waters, fill the air with song.

The Karui Way is yet a seedling here, but it grows, gains in pride and power every day. Kaom has kept his promise. The time of the Karui has come.

Black storms descend on us from the North. Unnatural tempests of rage and hatred, lashing our backs, tearing at our houses. The rain is shot with shadow. It withers our crops, sickens our livestock.

And the wind... the wind carries with it a restless spirit that breeds melancholy and madness. A spirit that creeps through our dreams, weaves tales of misdeed around our resting minds. We try not to listen. We try to remember ourselves. Some of us forget.

Brothers fight. Brothers die. Kaom punishes those that quarrel, that steal, that murder. Yet still the nightmares goad us into malefaction.

We Karui are banished from sleep.

The earth of Wraeclast rejects the dead. The black spirit of storm and dream now reaches into the ground and raises up our slain imperial foes. It leads the fallen from their graves and drives them to fight us beyond the end, rotted tooth and jagged nail.

Our own Remembered have joined their cursed ranks. No longer may we give our beloved to the birds, messengers of spirit to the sky, conveyors of flesh to the earth. Kaom has commanded us to destroy our Remembered with axe and fire. Kaom is the bravest of us, willing to bear the ire of the Ancestors for the survival of his people.

The black spirit infects living flesh and bone. The animals suffered first. Their bodies changed. Their eyes filled with a hatred of mankind that is beyond instinct.

What have we done to enrage Wraeclast? We look to Kaom. Our King will lay the spirit of this land at peace.

The Ship Graveyard I

Kaom stands before us and looks out to the raging sea. He sings, calls, screams to our Ancestors to come to our aid. He offers them the Gifts of Old, a feast of heart and mind, muscle and marrow, cooked in the fire and rock of this angry land.

We have not practiced these ways in so many years. Only in the darkest of times, most desperate of times, do we perform these oldest of rituals. Only here and now may we sacrifice and consume our own. Only in our King can we trust this return to our ancient selves.

Hyrri has made ready her canoes. We will take those that are left, five hundred forgotten families, and carry them back to their true homes. Back to Ngamakanui.

Kaom's promises have lead us into nightmare. Hyrri will lead us back to the dawn.

I dreamed of my Ancestors' halls. They were empty.

I dreamed of the north, of an offering left to us by Tukohama, an offering that will save the Karui. I needed only to take it.

I gathered my finest five hundred. I brought them here. I claimed what Tukohama had promised me.

We crushed the servants of Kitava beneath our heels as we marched across the land. I allowed not one of my five hundred to fall. The blood of the Ancestors surged in our veins and each and every one of my warriors earned Tukohama's mark upon their skin.

We descended into the heart of Wraeclast, and there He came to me. Tukohama. He asked of me a sacrifice. I gave it willingly. My axe fell five hundred times, the jade drinking its fill of Karui blood.

The Eternals opened the gate and invited Kitava into this land. The Karui paid the price.

Kitava cut us off from the Ancestors, raised the Remembered as His children, tortured our dreams.

Kitava murdered the Karui Way. I will found a new Way, for I have been chosen. I gather my forces so that I might wage war on Kitava. I am the son of Tukohama, and I will lead the Karui back to glory.

The moment your skin touched the corrupted soil of Wraeclast, you were infected. Kitava has soaked this land in his filth. I will crush the corruption from your bones, drain your black blood upon this sacred ground.

Brothers and sisters, I honour you with a warrior's death. Your spirits will fight by my side when we march against Kitava. You will be given in service to Tukohama.

You will be remembered with glory.