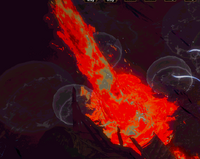 A fire whirl by Xoph monster

Xoph's Favoured is a kind of Hellion monster. It can only find in Xoph's Breach, such as in Xoph's Domain by using a

(and its upgraded version). it looks similar to Xoph's Loyal. Both variants can be raised as spectre.

Xoph's Favoured has six internal variants which have different metadata id but the same displayed name.[1][2][3][4][5][6]

Empowering Howl" (internal id: EmpoweringHowl or EmpoweringHowlSpectre), which is a buff that adds physical damage as extra fire damage, and the monster version of

CleaveCleaveAttack, AoE, Physical, Melee
Radius: 20
Mana Cost: 6
Cast Time: 1.00 sec
Attack Speed: 80% of Base
Effectiveness of Added Damage: (125%-170%)The character swings their weapon (or both weapons if dual wielding) in an arc, damaging monsters in an area in front of them. Only works with Axes and Swords.Per 1% Quality:1Superior2Anomalous3Divergent4Phantasmal0.5% increased Attack Speed+1 Life gained for each Enemy hit by your Attacks2% increased Area of Effect while not Dual Wielding5% chance to Destroy Corpses on KillDeals (125-170)% of Base Attack Damage
When Dual Wielding, Deals 60% Damage from each Weapon combined
(2-75) to (3-113) Added Attack Physical Damage
+(0-6) to radiusPlace into an item socket of the right colour to gain this skill. Right click to remove from a socket.

. The remaining variant, however, uses the skill internally known as "Flamebreath".